Stuff Aesthetic Fascists Like: Of all the singers populating my ears over the years, none has provided more habitual companionship than Sufjan Stevens. His music is a soundtrack to my life, which has a certain fittingness because we were both born in the same year. It is never easy to articulate why one singer becomes a resonant voice over another. But his voice has persisted for me when others have faded or disappeared altogether. For the sake of practicing aesthetic asceticism (try saying that phrase repeatedly), I will feature one of my favorite songs from each of the albums that I return to over and over again. Other songs could be highlighted, but self-denial has to begin somewhere. 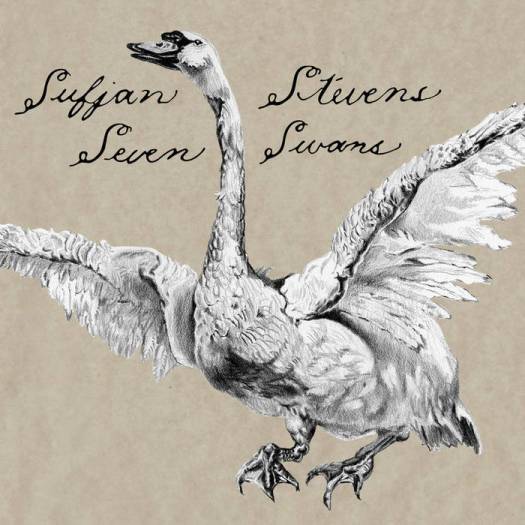 Album Description
Multi-instrumentalist Sufjan Stevens made a couple of records that slipped under the radar before his third, the astoundingly lush post-rock concept album GREETINGS FROM MICHIGAN, gained him critical attention and cult status. Seemingly bent on not repeating himself, Stevens scales down MICHIGAN’s grandeur to a minimalist palette for SEVEN SWANS (2004). Where the previous album was instrumentally comparable to Tortoise or Stereolab, SEVEN SWANS is practically lo-fi, based around simply strummed acoustic guitars, banjo, organ, and hushed vocals. It’s more akin to laconic Americana troubadours like Will Oldham and Iron & Wine, though no amount of sonic slimming-down can disguise Stevens’s knack for crafty arrangements and accessibly quirky songs.

Lyrics
When he took the three disciples
To the mountainside to pray,
His countenance was modified, His clothing was aflame.
Two men appeared: Moses and Elijah came;
They were at his side.
The prophecy, the legislation spoke of whenever He would die.

Then there came a word
Of what He should accomplish on the day.
Then Peter spoke, to make of them a tabernacle place.
A cloud appeared in glory as an accolade.
They fell on the ground.
A voice arrived, the voice of God,
The face of God, covered in a cloud.

What He said to them,
The voice of God: the most beloved son.
Consider what He says to you, consider what’s to come.
The prophecy was put to death,
Was put to death, and so will the Son.
And keep your word, disguise the vision ’till the time has come.

GENIUS: Annotation of “The Transfiguration”

2 Replies to “Sufjan Stevens: The Transfiguration”